February 13, 2019
He had suddenly appeared in Yanagi Town in Yanai City where I lived.
This was when I was in the fourth grade.

I was the gang leader of Yanagi Town. Every day after school, we enjoyed playing games like, kick the can, Chanbara sword fighting, and tag. Nobody studied. Those were the good old days.

His name was Yongsoon Shirakawa. He had a large build and possessed thin penetrating eyes and was quite good-looking.

He moved to the area with his family, where a group of Korean people lived. There was an area where they would breed pigs, raise goats and chickens, and the area had a very distinctive smell of mixed animal manure.
It created a unique atmosphere that was not easy to step into. And that was where he came from. Now I come to think of it, there was no doubt he wanted to join us.
He forcibly barged into our group. Reluctantly, we let him join our games, but he was not really on the same wavelength as us and after a while we would get into a fight. Naturally, it would be a fight with me—the boss. Although I was used to fights and was brimming with confidence, he would always skillfully grab my shoulder, easily raise me up, and throw me on the ground.

He was terribly strong and the shock of hitting the ground always left me lost for words in agony. Looking down at me groaning, he calmly retreated.
We would fight again and again but I could never win.
The same outcome would be waiting but I would never surrender.
The fight was not over but I had no skill to win.
And those were the days that followed.

One day during my fifth year, I was playing with some older kids on the hill in front of the vegetable store, when he—Yongsoon—appeared and picked a fight with me.
After exchanging some fierce words, he withdrew, and came back with a large bamboo bat.

He told me he would beat me. “I dare you”, I said and stepped forward.
There was no way he was going to.
I didn’t think he was going to break the rules and fight with a weapon. I had underestimated him.
But he swung the bamboo bat. I was struck square in the head. I was in shock than pain. Without thinking, I touched my head and felt the lukewarm blood thickly drench my left hand. Soon, blood was pouring down my entire face. Yongsoon became pale faced as he saw the seriousness of the bleeding. Instead of worrying about the pain, I chased after him to his house to make the most of this opportunity, where I thought I had finally won.
“Yongsoon! Get back out here!” I shouted in front of his house, and his parents appeared to see what was going on. Seeing their surprised looks, I shouted “Look what you’ve done! You’re going to pay for this!” repeatedly. Even his massive father was trembling. I called out for Yongsoon repeatedly, loudly boasting my victory. My sister Yoko, who heard the disturbance, came out.
“Yo-chan (my name), what happened?! This is serious! Take him to the doctor right away!”
And so she took me to the doctors.

Luckily, I only needed two stiches, but my head had to be heavily wrapped in a bandage.
It was an injury of honor. I thought I looked extremely impressive. 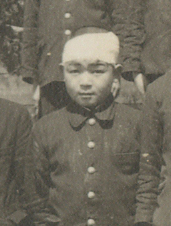 I broke away from my sister who was trying to take me home and went back to Yongsoon’s house to finish what I’d started.
“Can you see this bandage?! You’re going to pay for this!” Everyone was too scared to come out.
My victory was complete. I had put an end to it all.
I decided to take a goat as compensation.
“I’m going to take the goat!”, I said loudly as I tugged the goat that was tied up away.
I knew how precious goats were to them.
My house did not need a goat so I left the goat along the river side on the way back.
The goat was going to be fine. I was sure, it could swim, and Yongsoon’s father was sure to rescue it.
From that day on, Yongsoon disappeared from our sight.

I wonder how many decades passed since then. I had never forgotten about him.
And then it happened during my mid-40s.
I returned home to Hiroshima to visit my relative’s grave.
My brother told me that he was concerned about the three large bikes called “Seven-half” (“Nana-han”) that were always parked in front of the clothing store he owned.
“Why don’t you say something?”
“That’s the difficult part!” He replied.
It’s probably the work of some crooks. But the problem isn’t going to solve itself so I immediately tried to remove the big bikes.
Suddenly, I was surrounded by three large men, who looked like yakuza.
“What’re think you’re doing?”

Just when it seemed as if they were going to beat me up, an attractive, well-built man looking a lot like the yakuza leader, suddenly appeared and started slapping the three men.
He was shouting, “What do you lot think you’re doing? This is not someone you can all gang up and win a fight over,” as he looked over at me. And then he said “Yo-chan, long time no see, you were really strong, weren’t you?”
He held out his hand, and I shook it. We stared at each other.
“If anything happens again, you let me know,” he said.

It was a miraculous moment. My dear old rival had showed up as my savior.
He hadn’t forgotten me either.
Our constant fights during those energetic youthful days were not a waste.
I did not want to be the person who lived in fear. That was the path I had taken.
Was it that he secretly respected me? I was delighted.
Back to Yoshio's Blog